Dr. Serhii Plokhii is the Mykhailo Hrushevksy Professor of Ukrainian History at Harvard University and Director of the Harvard Ukrainian Research Institute. He is one of the foremost historians of Ukraine. In the second and final part of this interview with Vostok Cable, he talks with Kimberly St. Julian about themes thrown up by his current work and the strained relationship between Russia and Ukraine. For part one, click here. 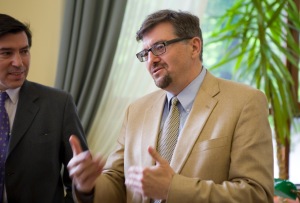 The debate is still of course ongoing as to what degree the USSR was an empire. My take on that is that whether or not the Soviet Union was an empire, it died the death of an empire, splitting along the lines drawn by the ethnographers of the nineteenth century. So from that point of view the disintegration of the Soviet Union is best understood in the context of the disintegration of other major European empires in the 20th century starting with the Hapsburgs, the Ottomans, the British, French, Portuguese.

The book is called The Last Empire, not because I believe that there will never be an empire after the USSR, but because the Soviet Union was the state that had a lot of bearings, features, and characteristics of the last great European empires of the modern era, the 18th, 19th, and 20th centuries. The Soviet Union inherited not only the territories, it inherited the ethnic groups, it inherited also some imperial policies and it was the first country that tried to keep the empire together by accommodating nationalities. That’s the policy that was introduced in the Soviet Union the 1920s, and the French and the British tried to implement immediately after the Second World War.

The Soviet experiment in keeping the empire together by accommodating nationalities was more successful than the attempts of its western counterparts to do the same. In that sense, it extended the life of empire in a certain form, from 1917 to 1991.

Yes, absolutely. What we see now is a major conflict between the two largest (in terms of human, economic, political and military potential) successor states of the Soviet Union. The argument that I am making in my book is that the Soviet Union did not survive 1991 because the elites of Russia and Ukraine either were not willing or not able to find a modus vivendi for continuing existence in one state. This becomes especially clear when you look at the last days of the existence of the Soviet Union, when Russia had already taken over the centre and Gorbachev had no money to pay even his staff. At that time it was not the relations between Gorbachev and Yeltsin that defined the future of the USSR, but the inability of Yeltsin and Kravchuk, who represented Russian and Ukrainian elites to agree on a more tight type of cooperation than the Commonwealth.

The Commonwealth was the maximum, in terms of what they could agree on. But even then they had different ideas of what Commonwealth would mean. And what we see today is in many ways is just a continuation of the story that started back then because people around Yeltsin believed that the Commonwealth would allow Russia to maintain its de facto control and influence over the post-Soviet territory so that the republics would de jure become independent states, but their independence would not be complete. That is basically the core of today’s conflict. Whether or not Ukraine is an independent state and can chose to sign the association agreement with the EU, join the EU and NATO, or its independence is conditional on Russia agreeing to certain steps.

You have given multiple interviews, written a few pieces and given many lectures on the current crisis in Ukraine. What do you think is the role of historians in times of political crisis in the regions that they study? What role could historians play in improving those situations?

Historians have a lot of responsibility when it comes to their relationship with society. In the case of most periods that historians write about, there are no survivors or witnesses around anymore, so it is historians who tell people, nations, ethnic groups, religious groups, and gender-defined groups what their history looked like. Each generation asks different kinds of questions and that is why historians still have their positions and jobs because they keep rewriting history.

So given that historians are the only window on the past, the only window on the experience of the world, the image that historians present should be very balanced, I’m not sure whether objectivity is something that can be achieved, but balanced interpretation of the events is a must. I started (this interview) talking about sources and access to the sources and how that influenced what I was working on or not, but by far the most important task of the historian is the interpretation of the events she or he writes about, and it has to be culturally, socially, and politically responsible. The history in general and stories that historians tell are not supposed to aggravate the conflicts that are already there, but rather, to heal the wounds.

The conference brought together historians from all over the world, but most of them were from North America, and Western and Central Europe, so the question we asked was about the field of Ukrainian history outside of Ukraine, in North America, Europe and the World in general.

The conclusions that were drawn, it seems to me, were quite optimistic for the field of Ukrainian history. Ukrainian history joined the general trend, stressing the importance of cultural history. We also participated in the spatial turn, we have, for example a GIS map project at HURI[2], but in comparison with France or Britain, a lot of research has not been done yet.

For anyone who wants to go into the field of Ukrainian history there are a lot of possibilities that are maybe not open in other historiographic fields. This is the first thing, the second thing is that Ukraine is an attractive field for research, because for centuries, it was a borderland between settled and nomadic populations on Eastern Europe, a country located between Western and Eastern Christianity, Christianity and Islam, Austria-Hungary and the Russian Empire, the Russian Empire and Poland. That presents a unique opportunity for comparative research.

You are getting, in ethnic and cultural terms, more or less the same social group functioning under different regimes and in different cultural and political contexts. For example historians of Russia, instead of trying to compare Russia and France, or Russia and Britain, would do a much more interesting job by comparing situation in Muscovy and the Grand Duchy of Lithuania. It would be more interesting to see how a social group coming from more or less the same historical roots (in this case the Kyivan Rus’political, legal and cultural tradition) is acting under different conditions and how it develops a different political culture. Thus, the borderland position of Ukraine over the period of time presents a very interesting subject for study.

And as you know, if you are interested in Stalinism, in studying the way how Soviet power functions, acts, and smells somewhere outside of Moscow, again Ukraine is an excellent place to conduct research in. In order to understand what Stalinism means, one should look at the history of the Great Ukrainian Famine and explore the Bolsheviks’nationality policy.

If one studies interwar Europe or the start of World War II, it is difficult if not impossible to ignore Ukraine. It would be difficult to understand these themes without looking at the minorities in Eastern and Central Europe, and Ukrainians happen to be the largest minority out there. The conference had ended on the note that there is a lot of work to be done, but it is very exciting work.

Do you have any other projects cooking up? If so, what might they be?

I am currently working on the history of Chernobyl nuclear disaster and the trick would be to look at what happened in Chernobyl in the broadest possible context. That context is the last decade of the Soviet Union, but I am also interested in the relationship in general between humans and nuclear technology. The 20th century is the time when nuclear technology came into our lives in many ways and some of those ways we just don’t want to continue.

I am looking at the ways in which the first generations of scholars, lay people, etc., reacted to the arrival of the new technology. How could they welcome something like Chernobyl Nuclear Power Station? They were certainly happy about the progress coming to the otherwise backward parts and regions of the world, and then once the disaster happened the attitudes changed.

I examine the impact of that change not only on the future development of the energy section, but also on political processes in the country. Chernobyl was one of those things that awakened Ukrainian society on the eve of perestroika. It was a major factor in political mobilisation on the eve of the disintegration of the Soviet Union. Going back to my previous book, I would state that the disintegration of the Soviet Union would not have happened how it happened without Chernobyl.

That is one project I am working on. I am also very much interested in the early modern themes and topics I am try to understand how the Cossacks, this group from the borderlands, very often without their state or polity, how it was depicted and presented on the maps. And once I figure that out maybe there will be another book project, but I’m not sure yet. Generally, I try to deal with one puzzle at a time.

[2] The Harvard Ukrainian Research Institute is currently developing a digital atlas of Ukraine, it can be located here: http://www.huri.harvard.edu/mapa.html.

What we write about